by Kill the Scientist 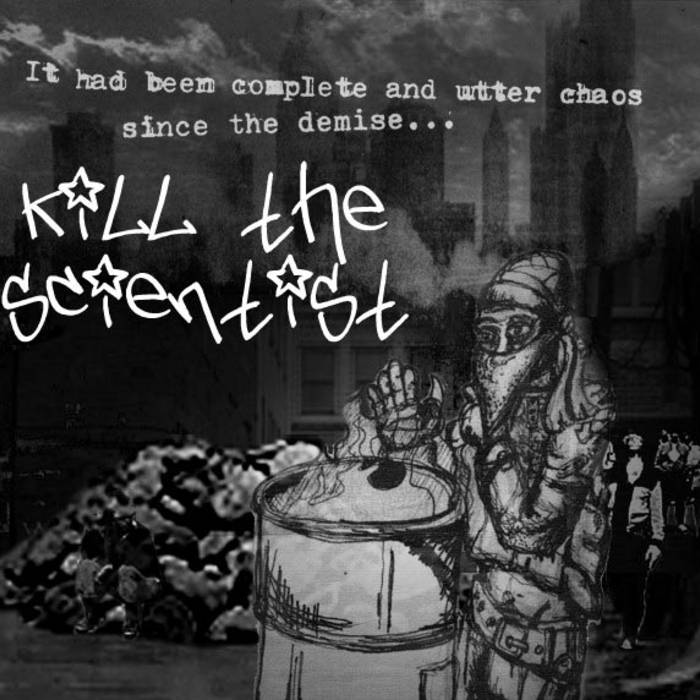 It had been complete and utter chaos since the demise…since the god or gods punished humans for the destruction of Earth itself.

So, if a punishment were to be chosen, then why not death? Why not starvation or fire or disease? Why has the human population of Earth been forsaken like this?

The Global United Scientific Community of Earth (GUSCE) in 2170 AD transmitted a message to the multimedia internet-TV of every home in the Global Union. This transmission had an attached holographic representation of the Global Scientific Commander-in-Chief as he gave a speech in the city-sized world headquarters of GUSCE, which, before the inevitable World War V, was a city by the name of Istanbul. The Commander-in-Chief bravely spoke to his nation, his Earth.

“A meteor, the size of which cannot be determined at this time, due to its speed and velocity, is headed toward Earth. Judging by its speed, however, we have an estimated eight years before its collision with Earth. We must brace ourselves for the worst, yet strive everyday for the best. That is all.”

This transmission sent many to mental institutions and facilities, and sprung over 100 riots throughout the Global nation.

By December 2178 AD, every human being had their hearts in their throats and their families by their side, hoping for survival or a quick end. No one knew, at this point, that humanity would be granted neither. This was the first Christmas in recorded history with over 1/3 of the human population committing suicide, but it was nowhere near the last. By this time, it was clear to the remaining scientists that the meteor would hit Earth by December of 2178 or January of 2179, no later. On the night of Christmas, no presents were offered, and none were taken.

The Earth shuddered and swayed in its entirety for over four days. Thousands lost their lives in the seemingly never-ending earthquakes, but many remained. And that is where I come in.

For you see, the meteor never struck the Earth. Earth itself was spared by chance, or maybe it was luck. Then again, maybe it was science. The Earth was spared, yes, but its humans were not. What many of the drifters say happened was that Jesus came down and with a mighty shake, pushed earth out of the way of the meteor. Others state that the meteor was about the size of earth, and since it was not necessarily headed for earth, merely passed it by. At such a close distance the two objects (their magnetic properties, to be more precise) pushed away from one another, shooting the meteor off course and causing Earth to lose its semi-regular orbital pattern.

Computers failed to work any longer... Energy production, food production – production of most kinds stopped completely. The first day was simply confusion. The entire globe was shocked and uncertain of what to do or when reality would jolt back to normal. The Global Union had disintegrated within seconds; the nuclear family was the only real order left to be had. No forms of Global or local communications worked, not one building was lit. Not one factory worked…Transportation was at a standstill, as were the economies of the world.

Days after the machines’ last ebb, riots engulfed the surface of the earth. Looters and madmen went to work while the rest hid in fright and bewilderment.

After a few weeks, warlords (Hitler reincarnates, if you will) banded the toughest together – to survive and conquer.

Many died from hunger, disease, and suicide. Many more died in territory skirmishes between the warring factions. With the collapse of the Global Union came the complete disappearance of any and all previous borders, boundaries, and all other imaginary lines. Laws and policies (and the defenders of such things) meant nothing. Money had no value. Every industry on the planet had been crushed with a single blow. Value systems changed dramatically and resulted in countless individuals losing grip with reality.

I’m no madman. I’m no warlord. I’m definitely not a looter. I could be a madman I guess, but I never lost track of reality. I accept my destiny. My job now is to document; if nothing remains, at least a history can be found. So as I sit here in Lunger’s Tavern, drinking my Axe-Root ale, I will continue to dig deep into my memory…and document.

IN THE HIGH COURT OF ALEXIA

A CURIOUS DOCUMENT HAS BEEN BROUGHT FORTH FOR THIS OFFICIAL MEETING

EMPRESS OTNI (calmly): Please! We know of nothing before Bolder’s crusades. This may very well be truth!

BALTHAZAR, LORD OF PROVINCE DEKAI RAISES HIS VOICE TO A BOOM.

BALTHAZAR: We are descendants of extra terrestrials who founded this planet after utter annihilation of all life forms and their very existence. A journal of such fragility—being printed on paper—to be found now, supposedly 6 million years later…
assuming we are human spawn!! –Bleh!

CHINKTEE, COMMANDER OF THE MILITIA OF BOLDER COUNTRY SHAKES HER HEAD AND POUNDS HER FIST ON HER DESK: No!! God created the Earth and all its ruins, then placed Bolder onto it.
EMPRESS OTNI (raising her hand): I am familiar with the current theories. But this document muddies all of our current ideas. We must dissect this journal in order to piece together truth, or find our way toward the purpose of the hoax. DOCUMENT-READER V1.0, CONTINUE TO READ THE JOURNAL! NOW!!

KTS on this recording are:


Additional vocals and noise by the GC crew

Vocals on “Turn of Events” by Heela

All of this was recorded* in Fullerton, CA (2002) in between fits of school, work, sickness and health…

*”Lunger’s Groove” contains samples from the KTS’ “KUCI Sessions” which were recorded by Toastboy23 and Shahab in 1999, when they broke into KUCI and used all the nifty equipment to create about 2 hours worth of KTS music, none of which was ever released.

*Some guitars/vocals on “Fall of Mankind” and all guitars on “A Near Miss” were recorded in Berkeley, CA -- not Fullerton

*This project could not have been possible without the Yamaha MT4X four-track recorder, the DOD BassTec distortion pedal (with many, many effects), the Boss Fuzz pedal, various freeware downloaded from the internet, cannabis sativa (?), 58cc’s human recombinant-DNA-derived insulin, daily.

*Broken strings can make for an entertaining afternoon as you attempt to alternately tune your guitar with the remaining three strings. Filtered through an extreme delay/reverb and played at high pace, the guitar mimics a san-tur (Middle-Eastern version of the piano played with mallets –That’s a DULCIMER TO YOU!).

*No recording studios were used, just two separate apartments in Fullerton and one duplex in Berkeley.

Record label of all flavors, shapes and sizes - founded in 1999.

Bandcamp Daily  your guide to the world of Bandcamp